From Shadowlack
Jump to navigationJump to search
This article is a stub. You can help us out by expanding it.

Trilok (Drelåkh in Khellakh) is the southernmost land mass on Ramath-lehi, surrounded by the Kaushal Ocean. It is the home of the Khell, an old pendragon subspecies known for being both brutal warriors and genius inventors. In some ways, that duality could be said to reflect on the continent as a whole; Trilok's main contribution to Ramath-Lehi's development is largely a technological one, but it doesn't take much to find a remnant of the continent's violent and bloody history - both between Khell cities and against forces from outside.

The climate of Trilok, being entirely within the planet's antarctic circle, is a cold and at times unforgiving one. Like Dhruv, Trilok has polar seasons, meaning that in winter there are days where the sun does not rise, and in summer there are days with no night. How long the midnight sun and polar night last depend on how close to the south pole one is.

Capital
Largest city
Sometimes called "the fortress which defies the coldest winters". This name may have come from the fact that it used to be a heavily-fortified citadel. The city has long since outgrown its original walls, but the central castle, Cronvintok, still stands proudly after thousands of years. The home of the Jarkorli family and Trilok's ruling parliament.

Formerly the capital of one of the old countries.

Formerly the capital of one of the old countries. Takes its name from the Volithin family. 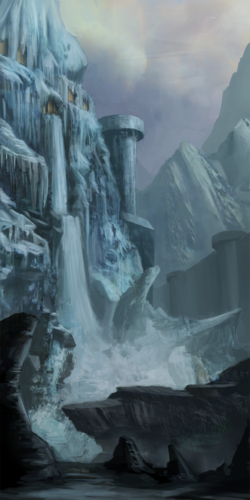 A small portion of the Cronvintok Castle overlooking the Kaushal Ocean.

Trilok's current head of parliament, often nicknamed the "Agony Aunt" by her detractors. As of 81,387 she's held the seat for close to three years.

A member of the Kjolac Feydragon clan and a member of Trilok's parliament. He is the all-but-official "ambassador" of the Aquabat and Fey inhabitants of Trilok and the Kaushal Ocean.

The current High Koeyrn (high king) of Trilok; however, as the position does not hold the absolute power it once had, he usually works alongside Trilok's ruling parliament.

A former military officer; now a member of parliament. Known for his distinctive appearance as much as his quiet but decisive nature.

A former high-ranking member of the Ramathian Mages' Union. Rumoured to be descended from the Craxela family and a daelarch worshipper; she has neither confirmed nor denied these.

A former member of the Council of Twelve.

Polsuden is built, making it Trilok's newest city and the one closest to the South Pole. Notably the city is entirely underground.

After several thousand years of careful political manuevering, the Jarkorli unite the remaining noble families and the people of Trilok under one rule, creating the United Empire of Trilok and beginning what is known as the Jarkorlian Era. In celebration, construction begins on the new capital, Cronvint, and their new castle, Cronvintok.

The Great Lockist War ends, with only a tenth of Trilok's population still alive. In the ashes of the conflict, a new family - one descended from political marriages to secure off-shore alliances - emerges. This family: the Jarkorli.

Long-running tensions, economic and political problems come to a head when a young Craxela prince destroys the capital city of Craxa (modern-day Cronvint) over inheritance issues. The resulting fallout begins the Great Lockist War, the worst war to ever wrack the continent.

The end of the "Ten Millennia of War" and beginning of the "Pax Trilok", a period of relative peace.

Beginning of the "Ten Millennia of War", with constant wars between the various countries of Trilok - and against foreign powers.

At the time the Sun Dynasty comes to power, Trilok is a collection of 46 countries and city-states.

First contact is made between the Khell and pendragons from the outside world.

The largest manufacturer of machina powered technology on Ramath-lehi.

A castle at the centre of Cronvint, and the former home of Trilok's ruling family.

Kaushal Ocean is the southernmost water body of Ramath-lehi, encircling Trilok and bordering the Sagar Sea. It is home to many Aquabat packs.

A volcanic crater and a traditional "neutral territory" for Khell families to meet.

A modest, slightly more out-of-the-way bar which is home to one of Trilok's largest fight clubs.

The large plain of snow that surrounds the Adamaint Empire.