From Shadowlack
Jump to navigationJump to search
This article is a stub. You can help us out by expanding it.

Located in the depths of the Samundra Ocean, Aurius is one of many wonders of the Pendragon homeworld. The city itself is a large collection of connected underwater domes all situated around one immense central dome. Each dome is heavily populated and houses countless Pendragons (and even some alien visitors from other planets). The domes are made out of a hard indestructible plastic, but just in case, they are also re-enforced with varying types of magic that give off tranquil, soft-glowing auras of ever-changing colours.

There are many buildings contained within this aquatic facility, including world-renowned hotels, a few small private schools, and even the Neon Space Launch Facility. The lower levels that reach to the bottom of the ocean are devoted to researching the depths and darkness of the abyss that is the entire facility's anchor. Still they make strange discoveries of new species and other odd things everyday.

There are two popular ways to gain access to the underwater world of Aurius: 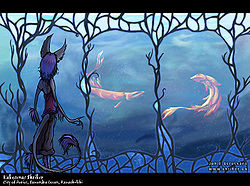