From Shadowlack
Jump to navigationJump to search

Please note that the information in this article is not considered "common" knowledge. The Rapine are not a playable species on Ramath-lehi, but are listed here for archival purposes. Most data that has been compiled in this species data entry may be based upon facts, myths, or may be purely fabricated.

Rapine do not live on Ramath-lehi. Rapine invasions are what Pendragons refer to as "Wars", and the "Battles for Life". Your character may not encounter one unless it has been said that there is an invasion or you get permission from the Administration. A Rapine has never been sighted on Ramath-lehi — yet.

The Rapine's only instinct is to hunt. They feed off of any unwilling being's soul.

Roughly every seven Ramathian years, the Rapine make their way to populated worlds full of life to feed off of other life forms. These times are considered war to the Pendragon race as they view the Rapine as a destructive plague that must be stopped. A single Pendragon could easily take on several Rapine, but their murders are so populated, each Pendragon can be easily outnumbered 40 to one. Once a Rapine has fed on enough souls to satisfy it, it returns to it's home planet to breed.

Rapine can be identified by their teeth, scales and claws. That's about all they have in common. The most common looking Rapine resembles a draconic alligator, but they they range from looking like some scaled wolf to a horse with teeth and claws, and depending upon the climate in which they were raised in, their scale colours and patterns can vary greatly as well.

They are not the brightest of creatures, but when they group like they do, intelligence isn't needed.

Draconis Rapine are the most dangerous sub-species of Rapine. They are huge. The size of small dragons, hence the name. They are more intelligent than normal Rapine, making them even more dangerous. Still not all that much is known about this specimen.

Archeus Rapine are quite different than the normal Rapine. They are still considered Rapine, but they have no eyes nor nose. They have cat-like ears that, instead of hearing, serve as little infrared sensors. They are shaped like tadpoles with spiky thorns jutting out from their scales. They have an almost dolphin-like tail, and two raptor-like legs. 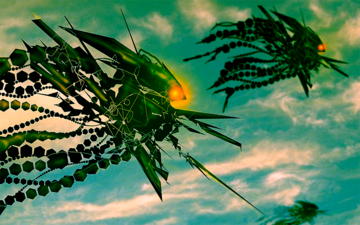 Any unfortunate soul that is killed by a Rapine is lost forever and does not return to Fronima, but rather gets pulled into the Nothing. Because most Pendragons fear the Nothing, they also fear the Rapine.

The Rapine social structure is based upon meritocracy. One's rank in society is determined by their intelligence and merit. The more intelligent and competent the Rapine, the higher in society and more respected, powerful and feared they tend to be. The draconis Rapine, due to selective breeding and genetic modifications, usually fill in the top ranks of the Rapine social order. Those with lower intelligence, or those who have been classified as civilians are often considered expendable and used for “grunt” or kamikaze jobs.

The Rapine are all united under one single federal government. Their unity and ability to make and execute decisions quickly and under extreme pressure make them a powerful force to reckon with. The government puts a very strong emphasis on their military. They glorify it with propaganda. They promote freedom of speech and otherwise do not repress their subjects. However, corporeal punishment as well as capital punishment are often practiced freely within their society.

The Rapine more or less revolve strongly around their military. To them, belonging to the military is to have a purpose in life (as it is the military's purpose to serve Kytlekh). The Rapine do not force their citizens into their military — all Rapine join the military voluntarily. The life of a common civilian is looked down upon with disgust. Those who have not served, who have not fought, do not have merit. Likewise, common civilians do not have the right to vote or take mates. It is only after a Rapine has fought in their first war do they achieve the “right” to vote and have a mate.

All Rapine believe in one god: Kytlekh (the Nothing). They believe that their purpose in life is to serve Kytlekh and that it is only by serving him that they will eventually reach enlightenment. By consuming souls themselves, the Rapine condemn them to the Nothing, which in turn feeds Kytlekh and keeps him happy.